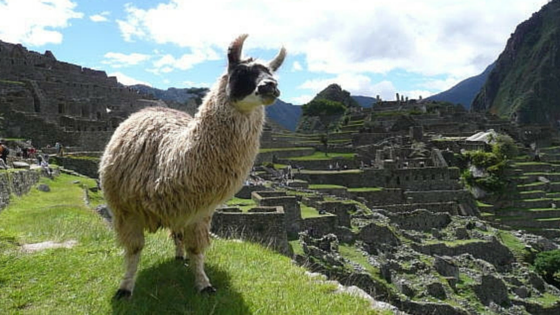 The wildlife on Machu Picchu is a varied constallation of baying, croaking and roaring creatures that make this biosphere one of the most unique of all of Peru. Since the area surrounding Machu Picchu, in particular the area through which the Inca trail runs is a natural reserve, whose wildlife is protected by the government, this is a great place for spotting exotic animals. In this post I have listed some of the animals that you are likely to spot from Machu Picchu and/or the Inca trail. 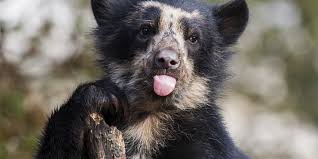 The spectacled bear is South Americas only species of bear, smaller than it’s brown or white cousins, the spectacled bear lives in the Andean Rainforrests. A typical male will be only around 140kg (300lbs). They are small, furry-fuzzy balls of mischief and have unfortunately been hunted almost to extinction. They now survive mainly in protected areas of rainforrest and have therefor found a safe haven in the cloud forrests in and around Machu Picchu. They are often spotted from the top of Machu Picchu and one great spot to view these fuzzers is from the sun bridge. 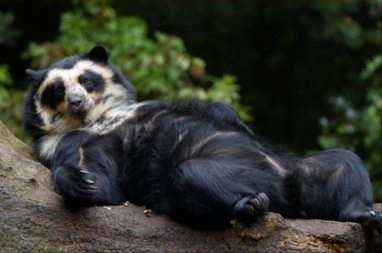 On the left you can see the spectacledbear in its natural state of repose, as though the furr hid an interior made out of pudding; it seems to be slowly melting into its seat. The bear also seems to be speaking directly to the viewer and asking for a stiff drink served in half a coconut and with a gaudy little umbrella.

Peru’s most quintessential species of Bromeliad (that’s fancy for camel) are the species of Alpacas, Llamas, Vicugnas and Guanacas. These represent a species of extraordinarily floofy camel 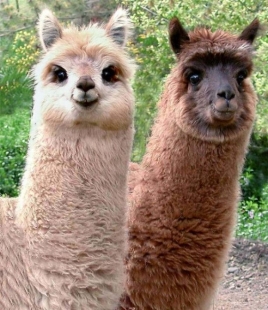 s, that seem to come straight from the romantic marshmallow fantasies of a 12 year old girl. These furminators with their exaguratedly large eyes are hauntingly beautiful. One does not not if these sparkling void-black eyes promise the worlds pleasures or all the terrors of the universe. One thing is for sure – these creatures know a lot more than us! That knowledge is in the smile of the white Alpaca. Llamas and Alpacas were first domesticated by early Andean settlers around 10 000 years ago and have been carefully studying us ever since. 90% of the world’s Alpacas live in Peru, whilst only about 1% of the world’s sheeps live here. It is easy to see why. What chance would sheep have in competing with these creatures. Add to their vast wisdom also the fact that they are much more efficient in using their natural environment. For example sheep rip out the roots of the grass they eat whereas Alpacas and kin snip off the leave only. This enables their surroundings to recover and regrow much faster meaning that Alpacas need less space to feed themselves. They are simply superiour! 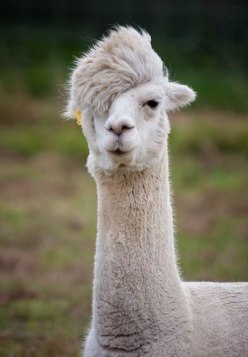 Alpacas have evolved into all sorts of glorious niches. On the left we have the Alpaca art
student who has taken time off from painting pictures of conflict area foods on backgrounds of slogans from Nietzsche, to travel the world ‘and connect with his roots’. You can almost hear him say ‘Mom I am too profound to be happy’.

As evidenced by this Alpaca’s, let us call him Weinholdt, hair, Weinholdt and his species produce some of the finest wool available. Not only has his fur kept the mouth of frostbite away but Weinhold also happens to taste fantastic. Luchy for us, less lucky for him. Even before Alpacas were used for their wool or as beasts of burden, they were hunted for their meat. Alpacas, Llamas, Vilcugnas and Guanacas are the Andean horse, donkey, sheep and pig all rolled into one, fulfilling a wide range of essential functions for the Andean ancient and modern people.

Come to Machu Picchu and see if you can spot these animals yourself. To be fair you will have no problem spotting the llamas or the Alpacas since they roam around the ruins of Machu Picchu as though they belonged there (which thechnically they do). However seeing a spectacled bear will surely be a highlight of any trip.